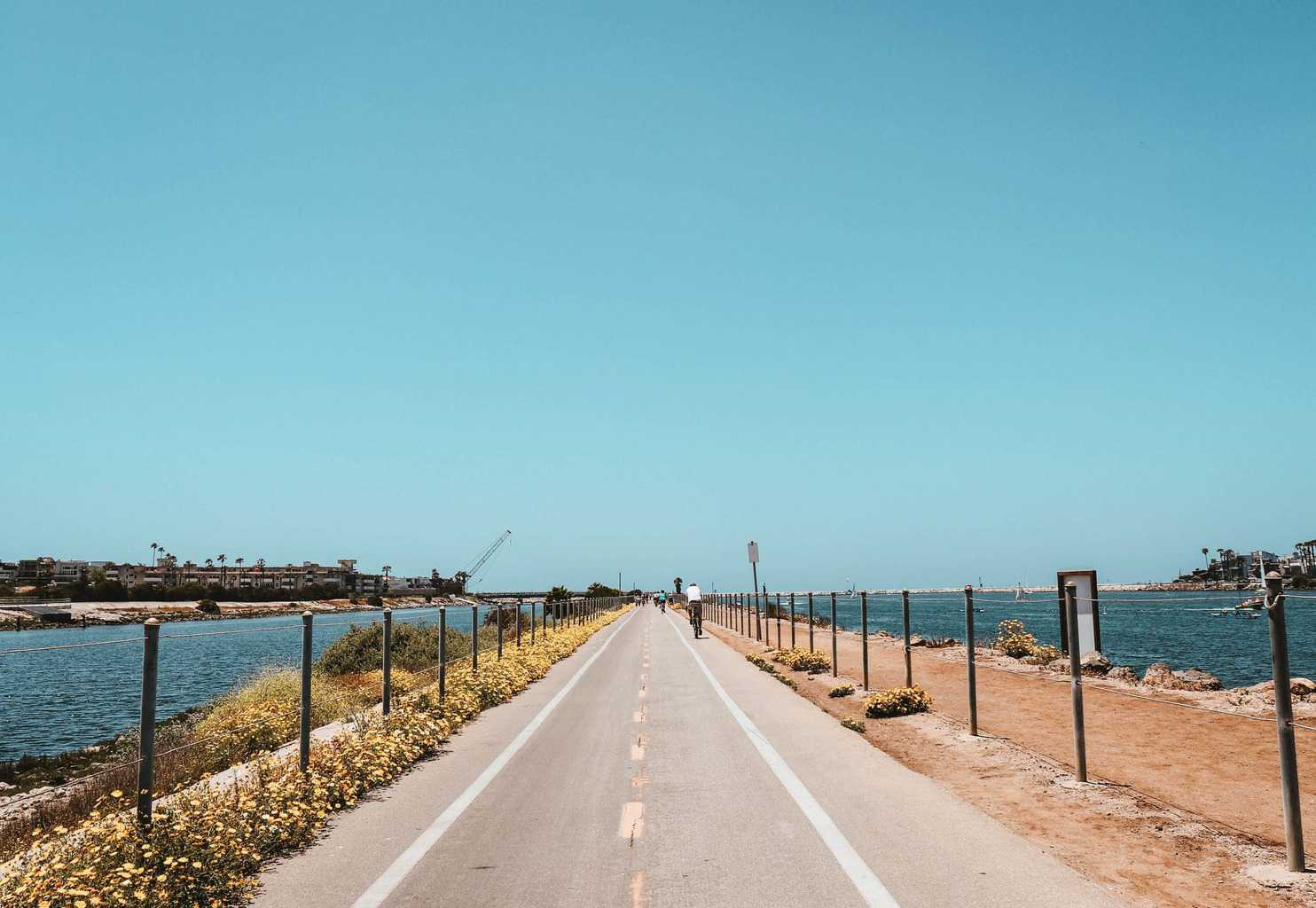 If you love traversing the country and also get some good exercise, then cycling is one of the best ways to do so. Fortunately, there are a lot of long-distance bike trails across the United States for the intrepid biker. Each trail has something different to offer.

We’ll start off this review with the Katy Trail. The Katy Trail is a 237-mile biking trail, which stretches across a vast area of Missouri.

The trail has plenty of beauty to offer, plus, more than half of its length follows the Lewis and Clark path up the Missouri River.

You can ride your bike along the trail, characterized by stunning river views and eagles hovering above you. The trail leaves the river to meander through scenic farmland and the small-town Americana.

You might like that the trail is also flat. So, you can ride on any bike seamlessly. A majority of cross-country cyclists include this trail in their tours.

You will also find some B&Bs along the trail where you can refresh as you head toward the French settlement of Rocheport and Jefferson City.

The Mississippi River Trail is not only one of the longest bike trails in the U.S., but also one of the most adventurous we know.

The trail follows the river for approximately 600 miles from its source within Itasca State Park to the Iowa border.

The trail offers you terrific views, and it is predominantly made up of asphalt roads. However, you can still find a couple of off-road trails, which are ideal for a wide array of cyclists.

Heading south, you can stay on the roads below the Mississippi River Bluffs or opt for the Apple Blossom Scenic Byway. The Byway has breathtaking views that will impress any rider.

Additionally, you can enjoy the wide range of accommodations and amenities along the trail.

Do you love long-distance biking? Well, then you may want to check out the Erie Canal.

The Erie Canal opened up in 1825, where it became an engineering marvel because it allowed commerce to get transported from the Great Lakes to the Hudson River via a series of locks.

After the train, vehicles, and airplanes got invented, boating on the Erie Canal was solely reserved for sunbathers and anglers.

But in the 1990s, this trail became a preferred route for bikers. The route stretches for 400 miles from Buffalo to Albany. The route is characterized by flat pathways with packed dirt and crushed rocks.

While biking on this trail, you’ll enjoy the scenic views of the Mohawk and Seneca Rivers, as well as Seneca Falls. This cycling on this trail is like a journey through history. Consequently, you might want to bring your camera.

The Great Allegheny Passage, also known as GAP is a trail that stretches for 150 miles from Cumberland, Maryland, Pittsburgh, to Pennsylvania.

The trail was built in a partnership between many local trail groups and volunteers and state agencies.

The GAP opened in 2007 officially, opening the way for intrepid cyclists to enjoy the route. If you love off-trail cycling, then you’ll be glad to know that this trail offers you 334 miles of off-road.

This stretch goes from Pittsburgh to Washington, DC.

But that’s not all this trail has to offer. The trail also offers you plenty of amenities, including camping, lodging, and dining facilities.

You can find them along with the small towns along the Great Alleghany Passage.

The trail also offers you great exercise because it winds around mountains, and also goes through valleys. The GAP also passes along three rivers – The Monongahela, Youghiogheny, and Casselman.

The Utah Cliffs Loop is one of the best long-distance bike trails you can find in the U.S. The trail is located in Southwestern Utah, and the region is referred to as the Color Country.

How come? It is graced by the green sub-alpine forests and the red rock cliffs, which make the view along the trail breathtaking.

You can tell by the name of this trail that is filled with cliffs. Notably, the Hurricane Cliffs, which you come across as you cycle northwards out of St. George.

The bike trail winds through Snow Canyon State, which is filled with many scenic sites, including the white and red sandstone cliffs. You’ll also come across the black lava rock here.

The trail then leads you through the historic pine valley, then to Cider City, the Hurricane Cliffs escarpment, to the Markagunt Plateau, and then you’ll descend to the North Fork Road.

The route goes for about 288 miles, but it is recommended for skilled bicyclists because of the high elevation and unpredictable weather conditions.

The Denali Park Road is yet another trail where you can enjoy riding your bicycle safely.

The trail is not so long compared to most because it stretches for 92 miles, but it is located in a remote area.

How so? That’s because Denali National Park occupies about six million acres of wilderness, which is also mountainous.

The park is also a habitat for grizzly bears, caribou, and other wildlife.

The park road is usually paved for the first 15 miles, and then you’ll be riding on the gravel road after that.

The trail is relatively safe for you because motorists are restricted to 15 mph on the gravel road. The region also has six campgrounds, where you can stay as you enjoy riding through the park.

Besides, the buses that offer park tours have bike racks. You can take your bike along the bus tour, and later ride out the park as you enjoy the scenery.

The Florida Connector is yet another impressive biking trail in the U.S. It goes from St. Augustine, Florida, to Fort Lauderdale, Florida, and it stretches for 519.5 miles.

The trail also passes across Fort Myers, as well as the Gulf of Mexico.

The Florida Connector is a mixture of roadside bicycle lanes and a separate trail. The trail also goes through some urban sections, like Orlando, which can be a bit hard to ride through.

But you can opt to ride through Florida’s interior parts such as across the orange groves, farmlands, as well as swamps.

The best time to cycle through this region is between December and March when the weather conditions are pleasant.

Do note that the remote areas of this trail have limited amenities, but it is in these sections where you’ll most likely spot wildlife, including reptiles, birds, and armadillos.

If you love site seeing as you ride your bike, then the Texas Hill Country Loop might be an ideal trail for you.

The biking route cuts across Austin, Texas, and it stretches for 311.3 miles. On this trail, you’ll experience friendly towns with plenty of amenities, historic sites, rivers, as well as state parks.

The trail begins in downtown Austin, where you’ll find plenty of options for detours such as the Barton Springs and the state capitol.

The trail will lead you to McKinney Falls State Park, and then to Gruene, where you’ll find narrow two-lane county and state roads.

If you wish to shorten your route, you can take the Pedernales Cutoff, which runs between Fredericksburg and Austin. The cutoff makes the Country Loop 213 miles.

The Great American Rail-Trail is one of the longest bike trails that you’ll find in America. The route connects over 145 existing rail-trails, multi-use paths, and greenways.

The trail is already 52% completed, and it traverses through 12 states.

Once it is completed, the Great American Rail-Trail will connect Washington D.C., to Washington State.

The trail aims to connect multiple existing trails, but there are approximately 90 trail gaps that are yet to be developed.

So, the entire project will take some time before it’s completed.

But once it is done, the Great American Rail-Trail will be accessible to about 20% of the U.S. population. Particularly those who live within 50 miles of the trail.

If you love cycling near the ocean, then the Pacific Coast Bicycle Route might serve your needs.

The trail begins at Vancouver, British Columbia, to Imperial Beach, California, and it stretches for 1848.6 miles.

Along this route, you’ll come across plenty of marine wildlife, including sea lions.

However, you may want to ride carefully during peak tourist seasons, especially along State Highway 1 and U.S.

Highway 101 because of heavy car traffic. Apart from the sea, you’ll also get to see the rural country, including farmlands.

The awesome wind breeze is also one of the best things about riding this route.